29/11/2019
International missions
Fire brigade
Civil protection
Intervention
On Tuesday 26 November 2019, the exercise Stayin' Connected took place on the ground of the Civil Protection in Brasschaat. A terrorist incident with biological agents was simulated in a fictitious foreign context. The exercise was organised to train the specialized capacities for CBRNe incidents (chemical, biological, radiological, radiological, nuclear and explosives) in special circumstances, as well as to test the mutual information and communication possibilities. 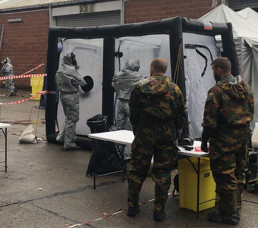 The scenario of the exercise was a biological terrorist threat during a fictitious winter festival called Connect, that saturated the communication network in the area. Specialized services had to intervene to investigate a suspicious location and to take appropriate actions. This particular scenario required extensive technical testing of a specialized communication and imaging technology, and the deployment of a logistical Base of Operations.

The exercise implied the active participation of 75 people from the B-LiFE Consortium and specialized services of the Federal Police, Defence and Civil Protection, as well as the CBRNe Centre of Expertise of the National Crisis Centre. The specific combination of specialized teams was a first for Belgium.

In addition, about 50 observers and VIPs attended the exercise to further assess the operational and policy challenges in the field of CBRNe and telecommunications. Accordingly, we were able to count not only on the contribution of Belgian experts, but also experts from the United Kingdom, Germany, the Grand Duchy of Luxembourg, the European Union and NATO.

Jorn Bronselaer, employed at the Directorate General of Civil Protection and general coordinator of the exercise: “This exercise builds on the BioGarden exercise of 19 June 2018 on the military domain in Peutie, The objective was now to anchor those results and to further elaborate on the lessons learned. The exercise is a great opportunity to strengthen together the interoperable preparedness for complex situations. Procedures, technologies and systems are continually being optimised by needs-based innovation for deployment on national and international territory. At the debriefing, the elements to be worked on are identified in order to ameliorate training and integration. It is crucial to increase mutual awareness on the ways of working and the specializations of the actors involved and this joint exercise was therefore greatly appreciated.”

Since its reform at the beginning of 2019, the Belgian Civil Protection is working intensively on the development of its specialized capacities and on the coordination with its partners, out of four Clusters. For this exercise, she was jointly responsible for the exercise setting and for specific activities of the CBRN and ICM (Information & Communication Management) Clusters:

Within the framework of this exercise, the CBRNe Center of Expertise of the National Crisis Centre (NCCN) was in charge of the organization of a “federal coordination committee”. It was the ideal opportunity to test the means of communication between the field and the crisis cell. Communication has been tested by radio and the transmission of images by fixed cameras, robots, drones and Go-Pro. The exercise also enabled the CBRNe Centre of Expertise to optimize its processes in the context of a multidisciplinary operational coordination in the event of a terrorist incident with chemical, biological, radiological or nuclear substances or explosives.